Project Haiti Orphanage and Children's Center is about the people of Haiti who are facing ongoing devastation following the earthquake of January 2010. It's about a replicable, RESILIENT model for rebuilding and it's not surprising that the USGBC, HOK and Lend Lease are utilizing the principles of Biomimicry to inspire the design. 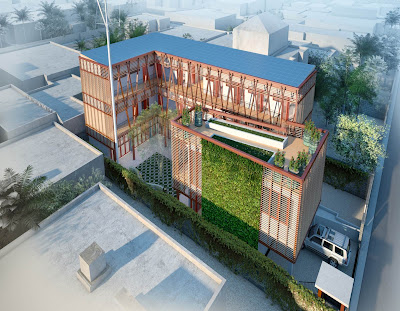 From www.asknature.org:
"Barks, through tannin and cellulose, efficiently absorb radiation between 6 and 10 microns. Other bark surfaces have developed a very rough surface that produces a lot of self-shading along-side the illuminated areas. Such a morphology stimulates the convection of air, which then transports heat away from the surface.

"Leaf temperature data support micro-climate buffering and create leaf temperatures that are cooler than ambient temperatures, especially during the hottest part of the day. Leaf size often affects the boundary layer, a thin layer of still air hugging the surface of the leaf."

Structure:
Lightweight yet robust reinforcement strategies improve the resiliency of the structure. Wood and concrete hybrids mimic the diversity of the natural forest and the strength of the Kapok tree can respond to abiotic disturbances such as the earthquake in 2010.
From www.asknature.org:
"A patchy forest is made up of a variety of species, spacing, ages, heights, densities and stages of succession. Combined with abiotic elements such as soil types, topography and micro-climates, the forest becomes more resilient. Tree root link together to form a heterogenous pattern which becomes more resilient to outside disturbances." 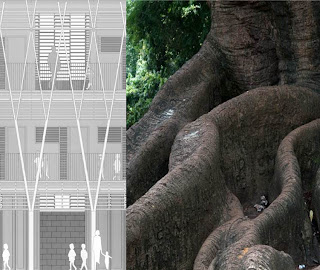